What Is Fleur de Sel?

Fleur de sel salt is a French word translating to the flower of salt. This form of salt is created when seawater evaporates leaving behind a thin layer of salt on the surface of the water. This layer is then carefully harvested with rakes or sieves gently to not destroy the thin beautiful flakes that are formed. The name of the salt is given due to the flower-like flakes formed.

This salt was traditionally formed by draining sea water into basins and then left slowly to dry in the sun where most of the last formed sinks to the bottom as ordinary sea salt while a little bit of it stays on the top most layer where it is harvested from. Making fleur de sel is very labour-intensive and takes a lot of time to produce. Furthermore, Fleur de sel salt can only be made when it is very sunny and dry with low winds to not disturb the flake formation.

These reasons make this salt a very expensive salt to produce but it is worth the high price tag due to its addition of burst of flavor that is obtained when used as a garnish over food as well as dessert.

Fleur de Sel, due to its addition of calcium and Magnesium that absorb moisture dissolving the salt slightly so that when it is used the salt dissolves faster on the tongue providing a burst of flavor. It also is used to finish desserts due to our tongues tasting glucose (the substance that makes things sweet) better when there is sodium used and therefore making the dessert taste sweeter. Fleur de sel has a higher moisture content making the salt taste linger for longer.

Fleur de sel is not recommended to be used in cooking due to its high price and difference in taste as compared to normal salt and is instead meant to be used as a finishing salt, used only as food is served so that the crystals stay intact and do not dissolve therefore losing its integrity. 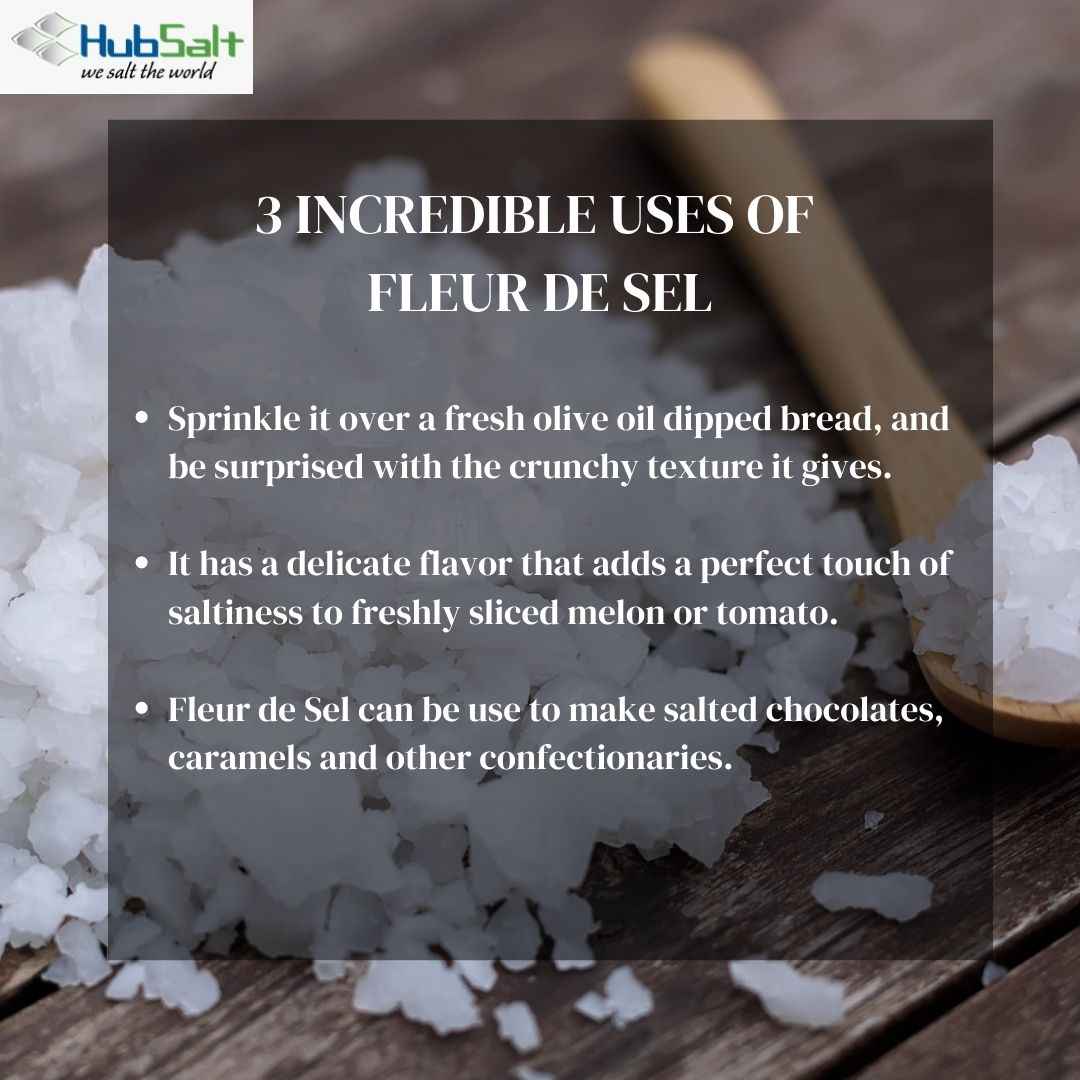 What are the Fleur de Sel Benefits?

Fleur de sel is not processed in any way, therefore, does not change the purity and is all-natural. Those who seek a natural source of salt-free from additives and any other harmful additions to the salt should use fleur de sel.

Fleur de sel is saltier than normal table salt and therefore has a unique taste and texture compared to other salts. This results in lower amounts of salt required overall and therefore lowers blood pressure and a lower risk of heart disease due to a reduced sodium intake.

It is commonly sprinkled over meat, salads, and desserts. Due to the salts’ high price because of production costs being high, the salt is used in small quantities and therefore only reserved as a finishing salt. Fleur de sel should not be added during the food’s cooking process as the heat makes the salt melt and therefore changes its properties making the salt less beneficial.

Where to Buy Fleur de sel

Seeing all these benefits does make everyone wonder where you can get your hands on this salt. Fleur de sel is available on Hubsalt’s own website where only the finest quality is sold. Hubsalt sells a wide range of salt products that includes a wide range of edible salts, chemical grade salts as well as many other salt products.

Best practice to store fleur de sel in an air-tight jar to prevent moisture from entering the salt.

Get in contact with HubSalt and enjoy the ancient delicacy.