What Is Sea Salt

Salt is a mineral made from sodium (Na) and chlorine (Cl) combined elements. Together, they form the crystallized substance sodium chloride (NaCl). As an abundant mineral in the ocean, most salt produced comes from evaporated seawater and salt mines.

Salt is such a common ingredient that it has become a necessity to humans for centuries. In this era, most will not know what tremendous power the salt had in history to the extent that it was used to pay a salary or trade. Civilizations were mainly formed due to the salt trade.

In ancient times, seawater was evaporized in order to get salt, and as time passed, improvisations were made, and the production would go through different procedures to get the best of it. After the whole process, the salts were then utilized for different purposes but was mainly used for curing the meat and fish. Prior to the invention of refrigeration, salt enabled worldwide trade and was used to pay for empires’ soldiers.

The fact is that throughout history, salt called sodium chloride by scholars has been such an essential element of life that it has been the subject of many stories, fables, folktales, and fairy tales. Salt was served as a form of payment at different times and situations. Usually visitors were offered bread and salt. There are many historical records that show us of the salt importance and being evolved as per human needs.

Today, sea salt (also known as solar salt) comes in many different colors, sizes, and flavors. Some salt go through lengthy process and few are naturally harvested or produced like Sea Salt. It is produced through the direct evaporation of saltwater. It is usually unprocessed or only lightly processed, retaining trace amounts of magnesium, potassium, calcium, and other elements.

On the other hand, table salt is extracted from salt sources and finely ground, making it easy to mix and use in varieties of recipes. This procedure normally removes some minerals from table salt, and additives may be used to prevent clumping.

Is Sea Salt Good For You?

In the last few years, the popularity of sea salt has increased among people against fine salt. Many products in the market are being made attractive by adding sea salt to their ingredients, chefs are using it in their recipes and even skincare products are being made of it. Let’s see the reason and validation of this comparison between sea salt and fine salt.

Sea salt is considered to be healthier by nutritionists because it is collected simply by the process of evaporation therefore, it retains mineral traces (like magnesium, calcium, potassium, and iron) that makes it healthier, tastier, and colorful. While on the other hand table salt or fine salt is extracted through underground mining and then processed before reaching us. During this process many minerals are removed from it, making it less healthy. Although iodine is added to fine salt that is helpful in preventing Goiter (a thyroid gland problem).

We need salt in our diet to maintain the blood pressure and fluid regulation in the body, which is done by sodium chloride of which any salt is mainly composed of so why is sea salt beneficial then. The reason is less amount of sodium because excessive sodium is harmful to our body and can cause serious health problems like blood pressure and heart stroke. The granules of sea salt are larger providing less amount of sodium per teaspoon (i.e., 4.2g) whereas a teaspoon of fine salt provides 6.1 g of sodium, 2 g higher. 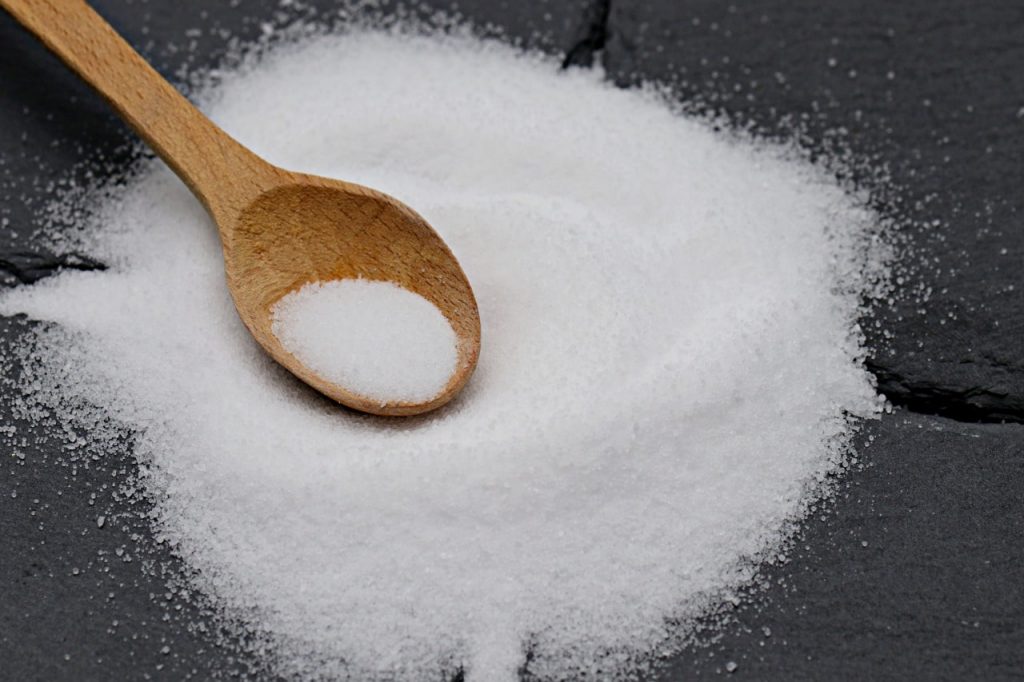 Nowadays many body scrubs, facial products, and other skin products are also available with sea salt as the main ingredient. The reason for using sea salt in skincare products is that it has been found it reduces dryness and hydrate the skin a lot, leaving it soft. Another significance of sea salt is that taking a bath with sea salt is highly effective against eczema, recommended by doctors as it significantly reduces inflammation. However, researches proves that it is due to the quantity of magnesium in the sea salt rather than the salt concentration. Another research discovered that greater sodium chloride levels in the body and on the skin may increase the number of immune cells that cause the inflammatory responses associated with dry, itchy skin.

Although sea salt is good for the skin, its other benefits are not supported by significant researches. And in real scientists say there is no considerable difference between sea salt and fine salt. Because the minerals found in sea salt are in much lower amounts that, the body’s mineral requirement can easily be fulfilled from any other food. The latest study has found that the seas salt we are eating these days includes microscopic plastic particles that come from bigger plastic trash that contaminate the water. The effect of these plastic particles hasn’t been identified yet, but we all know plastic is not good for our bodies at all.

Where To Buy Sea Salt?

Sea Salt of different colors, sizes, and flavors can be easily found in major supermarkets by consumers. The likeness of many consumers can be seen is particularly more inclined towards the unprocessed Fleur de Sel “Flower of salt,” which is hand-picked and harvested naturally. The Fine sea salt is preferably used in cooking and for seasoning salads and meat at the table. All of these discussed benefits and uses of fine sea salt have made it worthy to buy sea salt.

Fine Sea Salt has been the top choice of many chefs and cooks for its saltier flavor at minimum usage. The majority of gourmet chefs and home cooks appreciate the distinctive qualities of Fine sea salt how it enhances the flavours and finish of cuisine.

HubSalt Fine Sea Salt is the perfect salt for marinades, soups, and dressings. This quick-dissolving, evenly-blending salt is an excellent choice for cooking. Bring out the taste in your cookies, cakes, and pies, or try out a new salted caramel dish. HubSalt ensures that only the finest salt crystals make it to your plate, ensuring that every dish you prepare is as tasty as you intended.

HubSalt has been providing the premium quality of bulk sea salt for major food-related stores and industries. It is 100% natural and pure and contains all the minerals that are found in the sea.